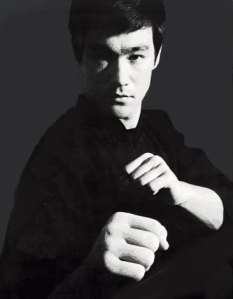 Jeet Kune Do was born in 1967 when it was named. However, it’s development had been progressing since Bruce Lee first began martial arts, at the age of 13, in 1953. Beginning with Wing Chun under the legendary Yip Man, Bruce totally immersed himself in martial arts. As a teenager it was normal for different Gung Fu stylists to challenge each other; this was usually done on the rooftops of Hong Kong buildings and sometimes resulted in nasty injuries. it has never been reported if Bruce was on the end of any of these injuries, but it has been claimed that he was an active participant in these challenge matches.

In 1958 he won a local boxing contest, without ever taking a boxing lesson, and the Hong Kong Cha-Cha Championships. Music was to be important throughout Bruce’s life. In 1959 Bruce moved to the USA and almost immediately came into contact with bigger protaganists than he had been used to back in Hong Kong. Bruce realised that his art had to change to deal with bigger people.

Over the next few years he began to work with weights, with the guidance of his friend James Lee (no relation), and developed the one inch punch. This was demonstrated famously at the Long Beach International Championships in 1964, a perfomrance that led to Bruce gaining the part of Kato in ‘The Green Hornet’. It was also around this time that Bruce had his infamous fight with Wong Jak Man. If you’ve seen the movie ‘Dragon’ then you’ll know that he was challenged by the local Chinese martial arts community because he was teaching to non-chinese. Bruce had always had a hatred of racism and refused to accede to their demands. It is generally accepted that Bruce won the fight (a much simpler affair than the movie version and without any of the consequences), but was unusually winded. He resolved to get himself in top shape and remain there. JKD took on another facet with the element of conditioning.

During the mid ‘60’s the kickboxing element became incorporated and more sparring became normal. In late 1969 Bruce closed down the Los Angeles school and the students relocated to Dan Inosanto’s backyard. In early 1970 Bruce hurt his back doing a weight-training exercise and it was at this time that most of his notes were written that later became the ‘Tao of Jeet Kune Do’ and elements of the books that John Little edited. When Bruce recovered he took a trip to Hong Kong that led to his role in ‘The Big Boss’. For the next three years he would become heavily involved in movie making as ‘Fists of Fury’, ‘The Way of the Dragon’ and ‘Enter the Dragon’ were all made. Back in the US Dan Inosanto had taken over the main teaching duties, with Taky Kimura teaching the Seattle group and James Lee continued in Oakland until his death in 1972.

With Bruce Lee’s death in July 1973 the future of JKD remained unclear, until Dan Inosanto and Richard Bustillo opened the Filipino Kali Academy in 1974. Following Bruce’s passing this became the mecca for JKD enthusiasts. Jeet Kune Do has continued to evolve since those days wit the arts of the Philippines, Thailand, Indonesia, Japan and Brazil all making their presence felt.

MMA (or Mixed Martial Arts) is the byword for martial arts these days, but consider this. A lot of what is being done in the ring was what Bruce Lee was advocating almost 50 years ago. In terms for what it means for you as a student of martial arts it means we are at the cutting edge of developments in martial arts, street fighting and the MMA world. With coaches in grappling and stick-fighting in combination with yoga, fitness trainers and me with a team of black belts, this makes JKD the perfect martial art for you.

If you have any questions call me on 01536 513715 or email me at andygibney@nobrain-nogain.com; or you could always pop in for a chat or watch or even take part in a class.